Excavation campaigns and archaeological survey by the School of Specialization in Archaeological Heritage of Matera, University of Basilicata – summer/autumn 2021 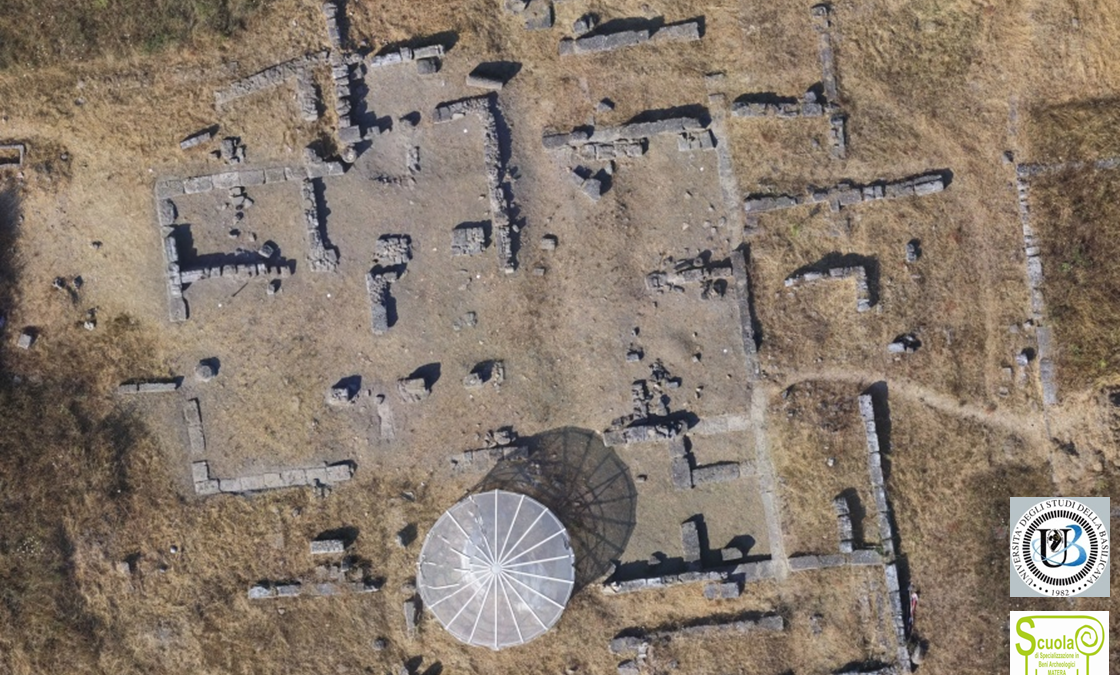 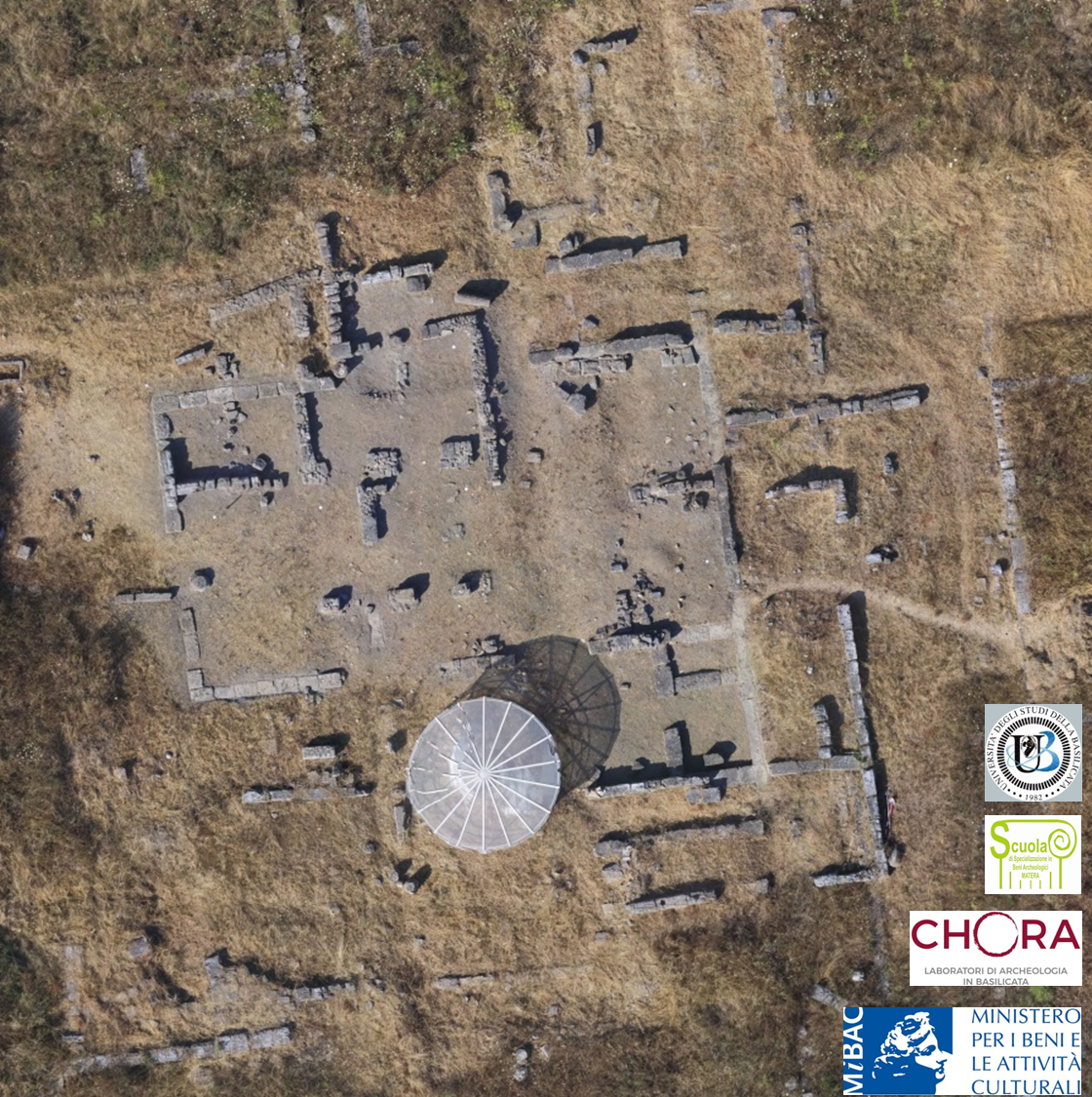 2nd excavation campaign (June 28-July 16). Scientific direction: Dimitris Roubis, co-direction: Francesca Sogliani. Coordination: Ida Campanile. The investigations at the so-called Castrum of Metaponto, after the interventions of the 80s and 90s of the twentieth century, focused on the area of a late imperial bath and of the late antique cathedral and baptistery (5th-6th c.). 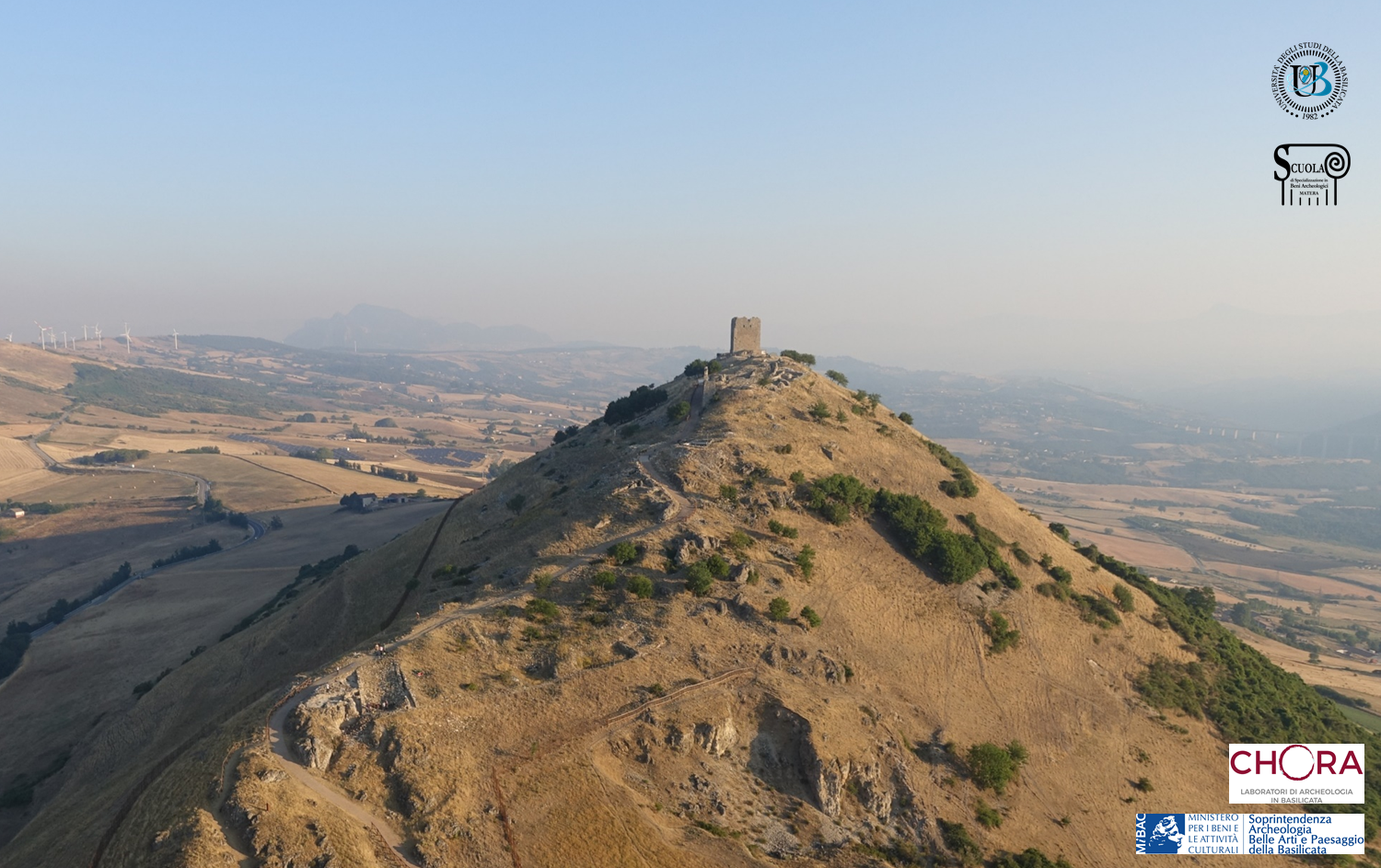 The investigation continue in the area of one of the villages of the medieval fortified settlement (12th-14th c.), located at the foot of the summit plateau on which the tower of the dominus and the cathedral building with the episcope are located. In the village a small church with a single nave with an adjoining cemetery has been investigated and the excavation of three large adjacent rooms is being completed, destroyed by a fire of which traces of charred beams remain. 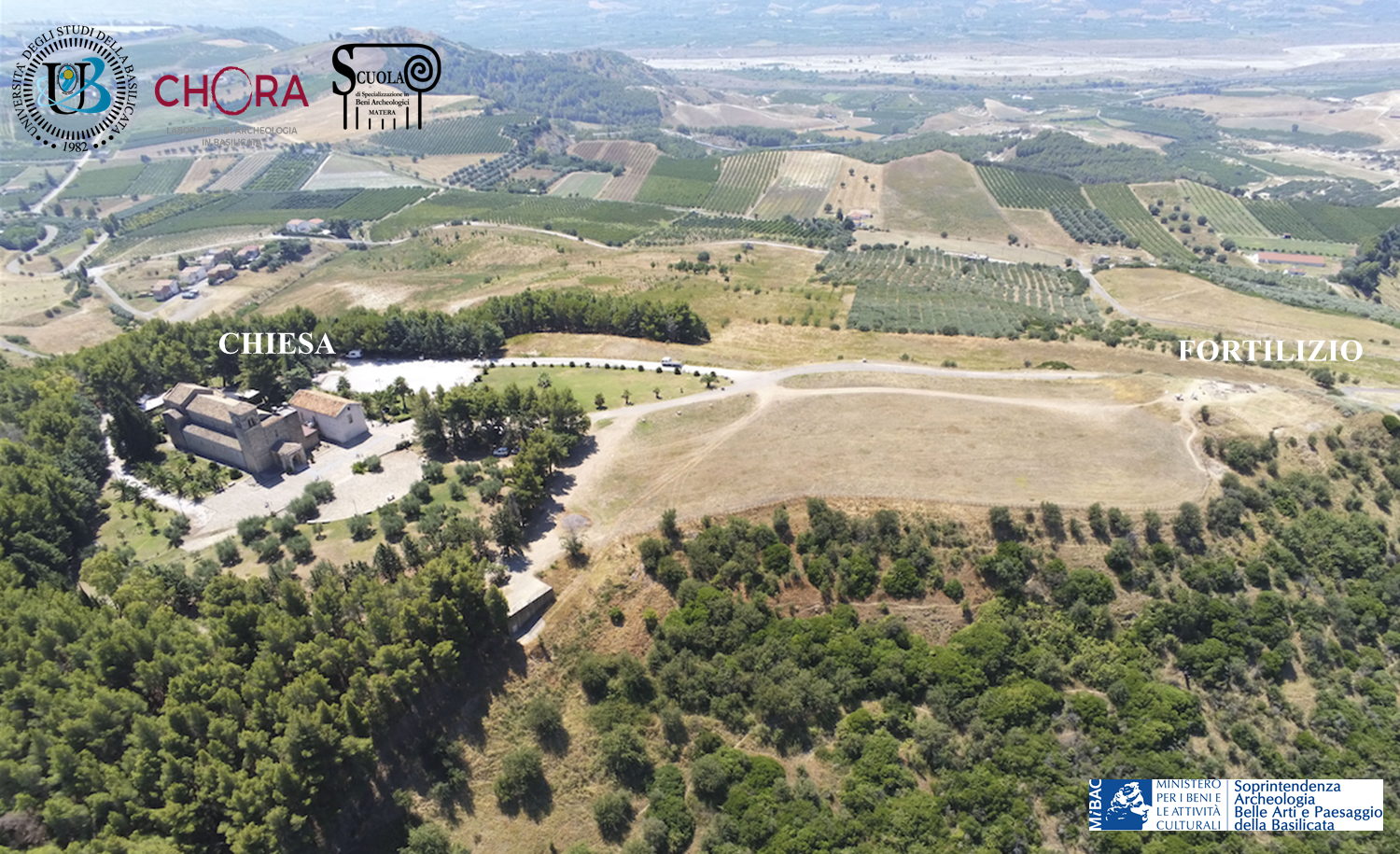 4th excavation campaign (19 July - 6 August). Scientific direction: Dimitris Roubis. Coordination: Ida Campanile. The small fortified site preserves a wall, the remains of a tower with a cistern and some rooms leaning against the walls, with phases of frequentation from the early Middle Ages to the 15th century. The fortified foyer insists on a previous agricultural village of the Classical and Hellenistic periods. 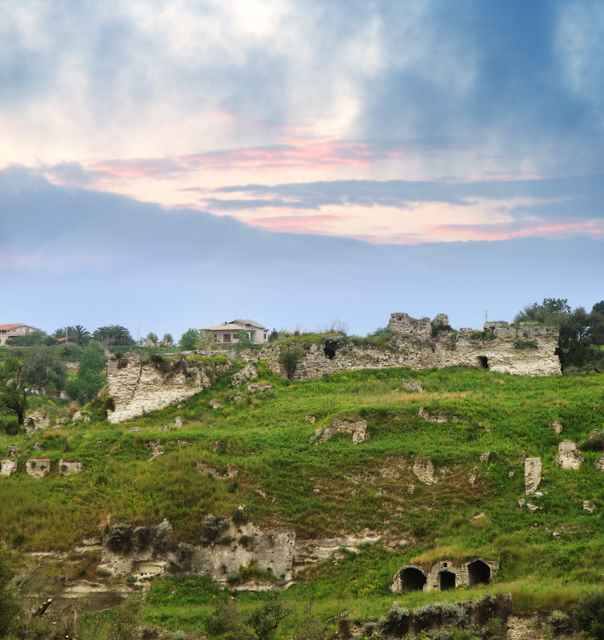 International project MAECI archaeological mission, SSBA Unibas - ISPC CNR, in collaboration with the Eforìa of Preveza. Scientific direction: Dimitris Roubis, co-direction: Francesca Sogliani. Archaeological investigations of the Greek Hellenistic town of Kastrì-Pandosìa on the Acheron, affected by a very large polygonal ancient wall with towers and gates and by a medieval fortification which encloses the top part of the hill.

The CHORA project (CHOrus of Resource for Archeology - Laboratories of Archeology in Basilicata) ended in February 2021, in collaboration with the Basilicata Region, born with the intention of carrying out a series of interventions aimed at promoting knowledge, and the development of the archaeological heritage of Basilicata, from antiquity to the Middle Ages. The joint work of the three project partners, the School of Specialization in Archaeological Heritage of the University of Basilicata (Scientific Manager of the Project: F. Sogliani), the Department of Historical, Philosophical, Social, Cultural Heritage and territory of the University of Rome Tor Vergata (Resp. M. Fabbri) and the École Pratique des Hautes Études - Université Paris Sciences et Lettres of Paris (Resp. S. Verger), has developed on three lines: training specialist in the archaeological field, research conducted through the use of modern technologies and methods of global archeology and the enhancement and communication of heritage which, through the creation of open space museums, thematic itineraries, open excavations and spaces usable by students, citizens and tourists, for the shared participation of the civil community in the knowledge and use of the archaeological and historical-regional heritage.

From 2016 to 2021 excavation and survey campaigns were carried out at the sites of Siris-Herakleia (Policoro, MT), Satrianum (Tito, PZ), Grumentum (Grumento Nova, PZ), S. Maria d'Anglona (Tursi, MT) ), Matera (MT) and Metaponto (MT). All the archaeological activities represented important research laboratories for the advanced training of archeology students, postgraduates and specialists in archeology, PhD students and PhDs from the University of Basilicata and many other Italian and foreign universities. The results of the activities will flow into a final publication and a virtual exhibition, both of which are in preparation.

As part of the CHORA Project, two other projects were born, still in progress: the DARHEM Project - Digital Atlas of Rupestrian Heritage of Matera (Scientific coordinator: F. Sogliani), dedicated to the study and digital documentation of the rocky environments that characterize the medieval settlement of the city of Matera and the surrounding area, with attention to all the functional categories that compose it, living and service spaces, religious places and complexes, water collection and distribution systems. The intense digital survey and cataloging of the individual rock units on the GIS platform is shared, as regards rock churches, with the CARE Project - Corpus Architecturae europeae and as a whole with the PRIN 2017 Project "The Byzantine heritage of 'Southern Italy: settlement, economy and resilience of changing territorial and landscape contexts ", coordinated by the University of Salento (PI Prof. P. Arthur), to which the School of Specialization in Archaeological Heritage - DiCEM of the University of Basilicata participates as an associated Research Unit.

The second project is dedicated to the Archaeological Map of Matera and its territory (Scientific coordinator: F. Sogliani). Started in 2007 on the occasion of the urban archeology intervention at the church of S. Maria La Nova (or ai Foggiali), now S. Giovanni Battista, in Matera, it continued as a study and edition project of all the unpublished archaeological material recovered in the urban area and in the territory, aimed at the reconstruction of the different phases of occupation of the urban and peri-urban area. Functional to the safeguard of the archaeological heritage and to the development of programs for the enhancement of archaeological sites and assets, it at the same time provides support for the effective management of the territory through the development of urban and territorial planning guidelines in terms of protection of the common cultural heritage, economics of infrastructural interventions and enhancement of historical landscapes. The long collaboration with the regional protection body and with the Administration led in 2021 to the signing of a Convention for the realization of the Archaeological Map of Matera, between the Municipality of Matera, the Department of European and Mediterranean Cultures - School of Specialization in Archaeological Heritage of the University of Basilicata and the Superintendence of Archaeology, Fine Arts and Landscape of Basilicata.

Training the archaeologists with digital skills 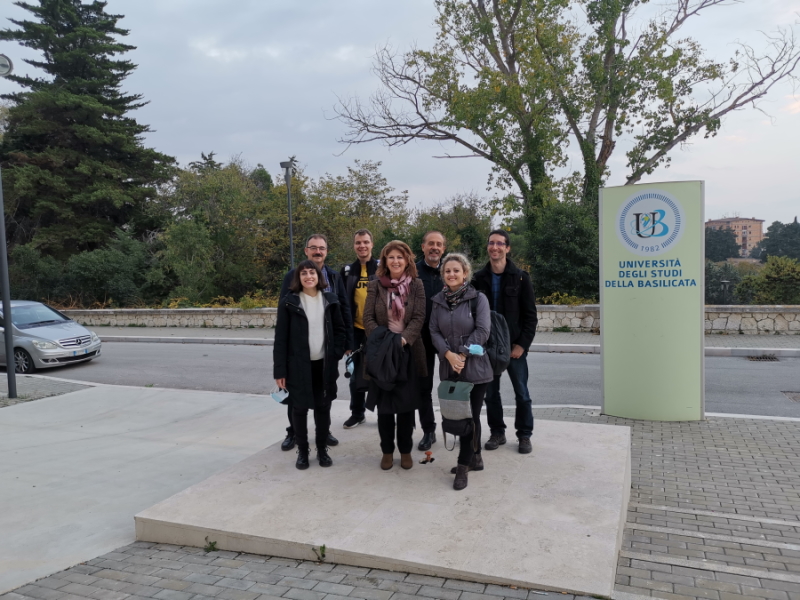 Read more
We use cookies to ensure that we give you the best experience on our website. If you continue to use this site we will assume that you are happy with it.Ok